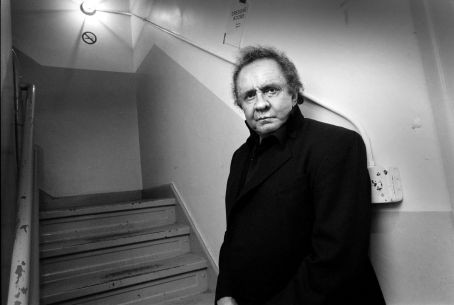 Johnny Cash worked with Rick Rubin and American Records for the last decade of his life--work began in 1993 and ended with Cash’s passing in September of 2003.  During the final decade of Cash’s career he released work that wasn’t only good--it was some of the most powerful stuff ever recorded by the Man in Black.

Too often Cash’s work before Rick Rubin is minimized in comparison.  Hopefully the 2014 release of Out Among the Stars dispels that notion.  It wasn’t just the quality of the work that made his final records so special.  It was the quality of the Man in Black himself.

He was a grandfather for all of the young fans who flocked to buy his records.  He was the rebel, the outlaw, and yet he was respected because of his sagacity, his spirituality, his maturity.  Somehow, Cash balanced both images--he was still the rockabilly from the 1950s, still the protesting folk-singer from the 1960s, still the country icon of the 1970s, and still the drifter from the 1980s.

“Delia’s Gone” proved that he wasn’t afraid of venturing into the dark regions of the mind.  “Why Me Lord?” let everyone know that his spirituality and humility never left him.  “Rusty Cage” proved that he could still rock.  “I Won’t Back Down” proved, well, that in spite of disease and age, Cash was still not a quitter.  “The Man Comes Around” proved that the songwriter was still alive and well.  “Hurt” proved to be the best music video of all time (and if you don’t believe me, just refer to Rolling Stone magazine).  With “God’s Gonna Cut You Down” the world got another Cash classic posthumously.  And with the release of “Redemption Day” and “Last Night I Had the Strangest Dream” we got a final glimpse into the Johnny Cash who wasn’t afraid to speak out against war and greed.

Whatever comes next, it is hard to imagine that it will disappoint.  Robert Hilburn, in his biography on Cash titled “The Life,” revealed at least one song that Cash recorded during the same session as “God’s Gonna Cut You Down.”  What song?  Kris Kristofferson’s “Jesus Was a Capricorn.”  The songs are perfect foils for each other--and both embody aspects of Cash’s complex faith.  Aside from that, rumors have been spreading for years about potential songs.  Here is a meticulously compiled list of what could possibly appear on an Unearthed Volume 2 or other releases of American material.

It is worth noting that Cash was planning on recording an album of black gospel before passing--but he never managed to finish that concept album.  Several of the songs listed below were likely recorded for that project, including “His Eye is on the Sparrow”, “If I Could Hear My Mother Pray Again”, and “Don’t Take Everybody for Your Friend” by one of Cash’s all-time favorite singers, Sister Rosetta Tharpe.  Other songs were written by Cash, and others were written by some of his closest friends, including Willie Nelson, Merle Travis and Johnny Horton.

* Denotes that a version has been unofficially released in some format.

Unreleased material from the Hundred Highways and Ain’t No Grave sessions:

“His Eye is on the Sparrow” (Civilla D. Martin)

“If I Could Hear My Mother Pray Again” (John Whitfield Vaughan)

“The Eye of an Eagle” (Joe Carter)

“Don’t Take Everybody for Your Friend” (Sister Rosetta Tharpe)

“I Am a Pilgrim” (Traditional)

“Jesus Was a Capricorn” (Kris Kristofferson)

“The Oak and the Willow”

Unreleased material from the Solitary Man and/or The Man Comes Around sessions:

Unreleased material from the Unchained sessions:

“You’re Gonna Make Me Lonesome When You Go” (Bob Dylan)

“The Mystery of Number Five”

“I Been to Georgia on a Fast Train” (Billy Joe Shaver)

“Jesus Was a Carpenter” (Christopher Wren)

“Wings in the Morning” (Johnny Cash)

“In My Time of Dying”

“Loving Her Was Easier” (Kris Kristofferson) *

“To Beat the Devil” (Kris Kristofferson) *

“I Witnessed a Crime” (Billy Gibbons) *

“The Wonder of You” (Kris Kristofferson) *