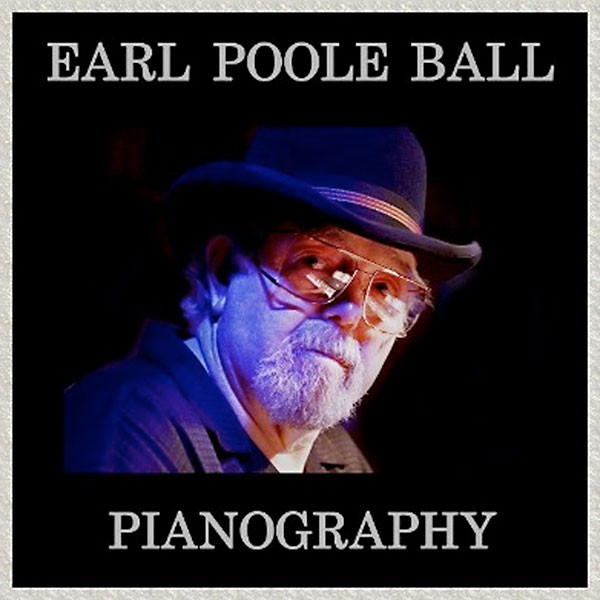 Earl Poole Ball’s most recent CD release, appropriately called Pianography, offers a little bit of everything.  There are studio tracks and live tracks, new songs and old songs, and a healthy mixture of country, blues, rockabilly and genuine honky-tonk.

After officially joining Johnny Cash’s band in 1976, upon Johnny’s insistence, Earl Poole Ball remained a regular member of Cash’s band until Cash retired from touring in 1997.  Of course, Earl had previously worked with Gram Parsons and Merle Haggard before accompanying Johnny Cash.  He could have easily made an album of standards from the stars that he spent so much time with.

Instead, what we have is a refreshingly original album that is independent, or indie, in the truest sense of the word.  The Austin-based Earl rounded up the local talent that he was working with, and set about recording some songs written by old friends, and as well as many self-penned titles.  In some ways, the album is autobiographical.  No song is reflective though than the travelogue title track, “Pianography,” that recounts Earl’s trek from California, to Nashville, to his current Austin residence.

“The Real Me” is an upbeat tune that is very much the open confession of an optimist, while “Standing At the Edge of the World” is genuine rockabilly, with with catchy lyrics and an equally catchy, whistling chorus.

Perhaps no song better embodies the honky-tonk feel than “Say You Love Me,” a duet with Cindy Cashdollar that concludes with a tuba, a trumpet, and an authentic Dixie Band vibe.  “One of Those Old Things” is a mournful country tune, complete with fiddle, and sounds like it could have been written for Johnny Cash himself.

“Sing It Boy” takes a comedic turn, as a bona fide bluesman laments the sorrow of the singing boy’s blues.  The last new studio track, “Something’s Gonna Get Us All,” has a dark and brooding instrumental arrangement, similar to Cash’s “Ain’t No Grave,” but chooses to laugh in the face of mortality and fate.

The second half of the CD is comprised mostly of live tracks, recorded at a Johnny Cash tribute concert.  With classics like “Big River,” “Down the Line,” and “Will the Circle Be Unbroken,” and “Mean Women Blues,” we’re treated to a blend of rock and country.  While the first half of the CD is notable for the strong arrangements and instrumentals, the live segment really showcases Earl Poole Ball’s famous piano.

The final two tracks are essentially bonus tracks.  Both were previously recorded and released as singles many years ago, and withstand the test of time.  “Second and San Antone” is recorded as an up-tempo rock ‘n’ roll track, while “Flowers on Papa’s Grave,” is a standard country rendition, with backup vocals and a steel guitar, adding one more unique track to the album.

Pianography is the real deal in a music market saturated with knock offs.  The music is a blend of so many styles that it can only be broadly classified as Americana.

You can buy the CD or purchase a digital copy of the album by following the link below.

You can also watch Earl Poole Ball perform the cut of “Big River” from the album live!