Aug 18 Posted by Jeff in Articles 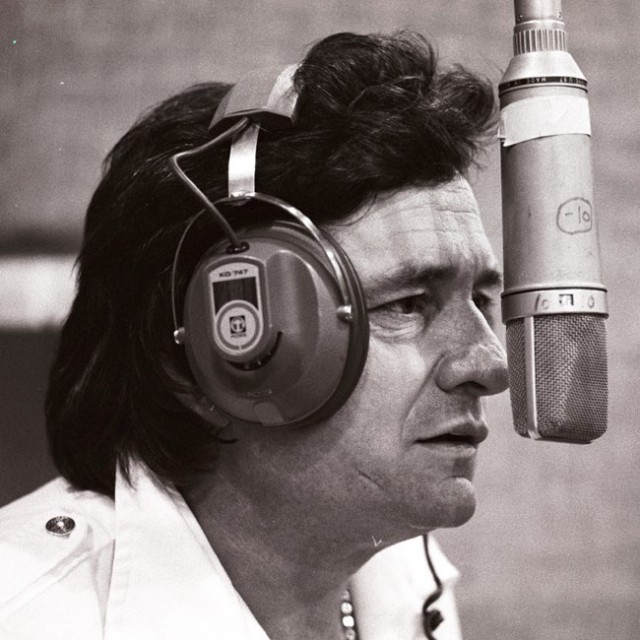 Johnny Cash had a talent that not all artists possess.  Not only was he talented songwriter (he wrote or co-wrote over 200 songs) but he was also great at taking a song and making it his own.  In this endeavor, Cash was able to defy any genre of music.  He covered The Rolling Stones’ “No Expectations” and Nine Inch Nails “Hurt” with ease—and he had been singing songs that surprised audiences for years.

Johnny Cash, in his 1997 autobiography, credited Rodney Crowell, John Prine, Steve Goodman and Guy Clark as songwriters who inspire him to write.  Of the above mentioned writers, however, Cash only covered Rodney Crowell songs extensively.  He recorded Goodman’s “City of New Orleans” as well as “The Twentieth Century Is Almost Over,” the latter of which was co-written by Goodman and Prine.   Cash covered several Guy Clark songs, including “Let Him Roll,” “The Last Gunfighter Ballad,” “Same Stone,” and “New Cut Road.”  It is interesting—though not surprising—that Cash’s inspiration comes from acclaimed songwriters that have never associated with mainstream country music but rather personify country with a mix of rock and folk.

But who did Cash cover most frequently?  The answer to that question is tricky.  In the list provided, I only list each song once—though Cash often recorded several different versions of songs throughout his career and he recorded many collaborations with his wife June Carter and The Carter Family, The Highwaymen, and many other artists.

If we count the number of songs written by someone that Cash recorded, the winner would be A.P. “Pop” Carter.  Cash recorded and released twenty-seven A.P. Carter songs, though Cash either duets or provides backup vocals on a great majority of the recordings.  The next runner up is Kris Kristofferson—Cash recorded and released sixteen of Kristofferson's songs.  In a close third comes Jack Clement, who had fifteen of his songs covered by Johnny Cash (one of which was co-written by Cash and Clement.)

Fourth on the list is none other than the legendary Hank Williams—Cash recorded most of his Williams songs during his tenure at Sun records or sang them on this TV show.  Fifth place goes to Harlan Howard, perhaps the least-recognizable name on the list yet one of country music’s most renowned songwriters, responsible for two essential Cash tunes: “The Wall” and “Busted.”

Billy Joe Shaver wins sixth place—though if you count the unreleased track of “Masters of War” by Bob Dylan, Dylan and Shaver tie with nine songs covered.  The “Masters of War” song was a duet with Kris Kristofferson from a TV show—wouldn’t it be awesome if it saw the light of day?

Peter LaFarge clocks in with eighth place with eight songs covered by The Man in Black.  LaFarge’s material was mostly covered in the 1960s when Cash labeled himself as a folksinger and was focused on championing the Native American Civil Rights movement.  Cash also recorded eight songs by Rodney Crowell, but only seven were released, which means Crowell ties with Merle Travis at seven songs.  Travis was one of Cash’s good friends in the 1960s and shared Cash’s sentiment for the working class, especially coal miners.

What can be determined by this list is that Cash did primarily cover folk singers and acts associated with alternative and outlaw country.  That didn’t prevent him from heavily recorded country pioneers like Hank Williams and novelty writers like Jack Clement.  Cash had a unique talent for selecting songwriters.  He recorded Shel Silverstein ballads, poetry by Henry Wadsworth Longfellow, and Soundgarden’s “Rusty Cage.”  As diverse as his tastes were, Cash had his favorites, and he managed to make any song he sang his own.

10.   GATHERING FLOWERS FROM THE HILLSIDE

9.     FLUSHED FROM THE BATHROOM OF YOUR HEART