Who were Johnny Cash’s musical friends?  Aside from his wife June, one might think of his fellow Highwaymen, Kris Kristofferson, Waylon Jennings and Willie Nelson.  Or maybe his Sun pals Roy Orbison, Carl Perkins and Jerry Lee Lewis.  There are also his friends in the rock field, like U2’s Bono and Bob Dylan.  But there was a time in the late 1960s and early 1970s when Johnny Cash and Pete Seeger were both on the folk music scene, and both were making protest music that would survive for decades--and in all probability centuries--to come.  A bold claim?  Go ahead--read on!

In 1959, Pete Seeger, among others, founded the soon-to-be-annual Newport Folk Festival in Rhode Island.  In 1964, the Festival had a very special guest--country music star Johnny Cash.  Cash, at the time, was being labeled as a folk singer by his manager Saul Holliff, who understood it would have more appeal to the young audience.  Cash, for his part, fully embraced and supported the new title.

Cash was scheduled to appear on July 24th, alongside Phil Ochs and Joan Baez, but did not arrive on time.  Many years later, however, Johnny Cash did get to perform with Joan Baez on Earl Scrugg’s “A Song For Woody,” which saluted the late Woody Guthrie and followed up as a sequel to Bob Dylan’s “A Song To Woody.”

On July 25th, Johnny Cash’s flight landed in Rhode Island and he was able to perform.  Pete Seeger joked, “[Cash] was way out on the West Coast and he found that, somehow, you can’t get from Nevada to Newport, Rhode Island, in one day.”  Perhaps it was destiny, because that night at the concert Johnny Cash and Bob Dylan met for the first time and started a beautiful friendship--Cash even played one of Dylan’s songs, “Don’t Think Twice, It’s Alright,” which Cash would later rework into his own classic “Understand Your Man.”  Before doing Dylan’s song, however, Cash introduced Dylan as “the best songwriter of the age, since Pete Seeger.”  The rest of Cash’s performance covered his hits, but he was sure to include his own protest song, “The Ballad of Ira Hayes.”  After the show, Cash wrote the following controversial ad in Billboard magazine:

“At the Newport Folk Festival this month I visited with many, many ‘folk’ singers - Peter, Paul & Mary, Theodore Bikel, Joan Baez, Bob Dylan (to drop a few names) and PEte Seeger.  I was given 20 minutes on their Saturday nite show (thanks to Mr. John Hammond, pioneer for Columbia by way of A/R). The Ballad of Ira Hayes stole my part of the show. And we all know that the audience (of near 20,000) were not 'country' or hillbillies. They were an intelligent cross-section of American youth-and middle age.”

Later, Cash was invited to be a guest on Pete Seeger’s TV show Rainbow Quest in 1966.  Joined by June Carter, the three folk singers had a fun time that was somewhat hindered by Cash’s poor health.

Luckily, Pete Seeger decided to make a rare step into the show business world and joined Johnny Cash on March 4th, 1970, on the Man in Black’s variety show, The Johnny Cash Show.  Even more interesting than Seeger’s performance on the show, however, is his conversation with Cash before the show.  The reason?  Seeger was all but banned from television due to his protest of Vietnam.  Cash, of course, would famously speak out against the war--and all wars--as he grew older. They were kindred spirits, and it is wonderful that, though the first two times they met Cash was involved with drugs, they were able to make their third encounter a memorable one.

"The Pete Seeger I know. . . [and] love is one of the best Americans and patriots I've ever known. For some reason it takes a long time to educate people and to make them understand." - Johnny Cash 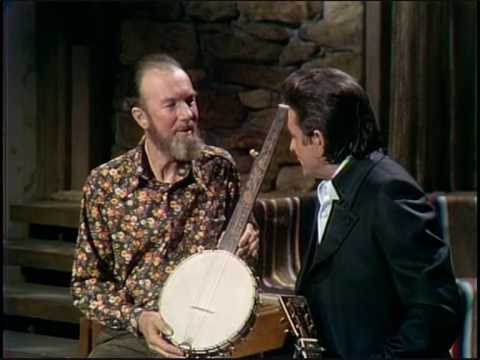