Mar 22 Posted by Jeff in Interviews 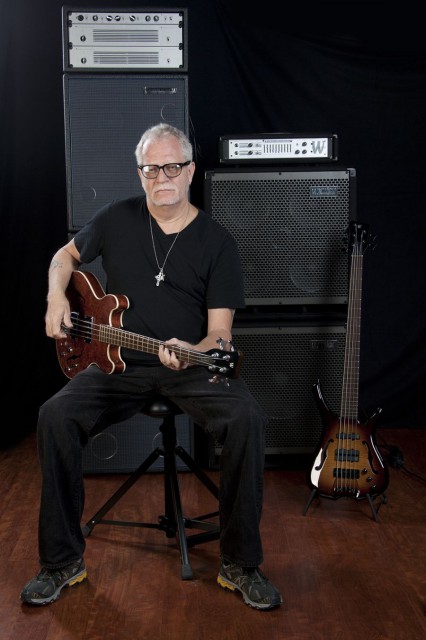 On March 22, 2014, Dave Roe Rorick, Johnny Cash's bass player from 1992 to 2003, was generous enough to give the Johnny Cash Info Center an exclusive interview!  On behalf of myself and the JCI team, we would like to thank Mr. Rorick for his time and participation!

1) When and how did you first meet up with Johnny Cash and become his bassist?

2) I understand that you started off with the electric bass, but now you primarily play upright.

I never played upright till I joined Johnny’s band. Learned on the job.

3) What was touring with Cash like after he signed on with Rick Rubin and the "American Recordings" label?

After the Rick Rubin thing started, we went from playing for mostly Johnny’s aging fans to playing a lot of everything-concerts, punk rock clubs, everything got a whole lot more rock and roll.

4) What songs did you record in the studio with Cash?  (We know you recorded "I'm on Fire" with Cash which has an awesome, driving bass part!)

I played on about a third of the Rick Rubin stuff. I couldn’t even begin to to tell you which ones.

5) How did you come to be a backup singer for Cash on songs like "Get Rhythm" during live shows?

6) Did you have any favorite songs that you performed on stage?

I loved playing "Big River" and "I Walk the Line" the most.

7) What was it like playing at the England Glastonbury Festival in 1994?

Glastonbury was awesome! So many people-all really loving Johnny. Loved that gig and Royal Albert Hall the most.

8) How did you first discover Johnny Cash?

I’ve known his music since I was very young--my mom loved him.

9) What is your favorite Johnny Cash song?

Favorite song--Bottom of [the Mountain]. Favorite record--the first on on Sun.  [Which was "Cry, Cry, Cry" and "Hey Porter."]

10) Were there any routines that went on before or after a show?

Johnny was pretty much the same all of the time. Very comfortable with who he was.

11) You've recorded or performed with an impressive list of people.  Care to drop a few names and memories?

I have so many great memories from different points in my career.  It’s all so good!

12) Even though your website states that you're a session player, is there anyone you perform with regularly now?

I’m in a really good band with my dearest friend Kenny Vaughan--Marty Stuart’s guitar player. We play a lot of our own material. Every Monday night at a little place called 12 South Taproom. Big fun.

13) Are there any words of advice or wisdom that Johnny Cash shared with you that you wouldn't mind sharing with us?

One time when I had a really bad cold, Johnny gave me this advice--“Have a shot of liquor--it won’t make you feel better, but at least you’ll feel better!”

14) Johnny Cash is known for his humanitarian works.  Can you share experience with Cash on that topic?

I don’t know much about that stuff as it concerns Johnny, however, I do know that he was very intent on making sure that everyone around him was happy, in particular his family and his employees.

15) Are there any forthcoming projects or albums that you are featured on that you can tell us about?

I’m very involved with my band with Kenny--that’s number one with me right now.  I’m also involved with a musical that John Mellencamp has written with Steven King.  I’m also on Ray Lamontagne’s new album due out soon. Busy is what I really like to be.

For more information about Dave Roe, check out the official website for this legendary Nashville Bassist!